logdiag is a simple multiplatform schematic editor written in GTK+.

This software is considered to be of alpha quality and isn’t recommended for regular usage. 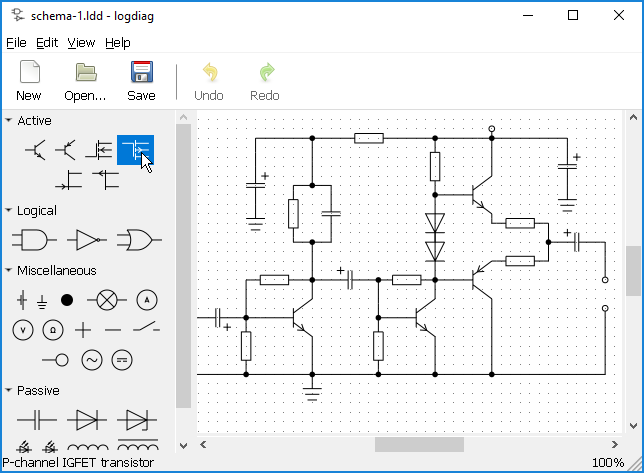 Regular releases are sporadic. git master should be stable enough. You can get a package with the latest development version from Archlinux’s AUR.

Build from source on Unix-like systems

First check that you have all the required dependencies installed, including development packages, if your distribution provides them.

Reserve a directory for an out-of-source build:

Let CMake prepare the build. You may change the directory where you want the application to be installed. The default is /usr/local.

Now you have two basic choices of installing the application.

You have to choose a package format understood by your system package manager. CMake offers DEB and RPM.

After cpack finishes making the package, install this file.

Build from source on Windows

Note that with the current method we’re stuck with GTK+ 3.10.4 at best.

First install CMake >= 3.1 and MinGW. Add both to your system path. If you want to build an installation package, also install NSIS.

Run the following command in the directory with source files to automatically fetch and setup all dependencies (contact me if the script becomes obsolete, it’s easy to fix but I usually update it only just a short while before releasing a new version in order to resolve compatibility issues):

Reserve a directory for an out-of-source build:

Now you can generate a package with CPack. You may choose between:

By default, that is if you specify no generator, both packages are built.

The procedure is almost exactly the same as before, including the requirements. Just install MinGW-w64 and let automation take care of the rest.

Use https://git.janouch.name/p/logdiag to report any bugs, request features, or submit pull requests. git send-email is tolerated. If you want to discuss the project, feel free to join me at ircs://irc.janouch.name, channel #dev.

Bitcoin donations are accepted at: 12r5uEWEgcHC46xd64tt3hHt9EUvYYDHe9

This software is released under the terms of the 0BSD license, the text of which is included within the package along with the list of authors.