Also included are several interpreters in various states of sophistication that document my progress as I was writing this, from the simplest approach to an optimizing JIT compiler.

It’s pretty easy to retarget the compiler, it just means redoing half the work. Thanks to the unified ABI, adding support for another flavour of *nix only means changing the syscall numbers. The compiler itself is platform agnostic.

To obtain dumps of the intermediate representation, compile with -DDEBUG:

When no input file is specified, standard input is used. Similarly, the default output filename is a.out. After the compilation, the resulting file can be run on the target platform.

You may have noticed the dwarf directory. simple.go is a non-optimizing version of the compiler targeting Linux only that adds DWARF debugging information mapping code locations onto lines in the ir-dump.txt byproduct output file. It’s been rewritten in Go since managing all those binary buffers required to build the symbol table proved to be too painful in C.

Type break *0x4000b7 into gdb to get a breakpoint at the first Brainfuck instruction. 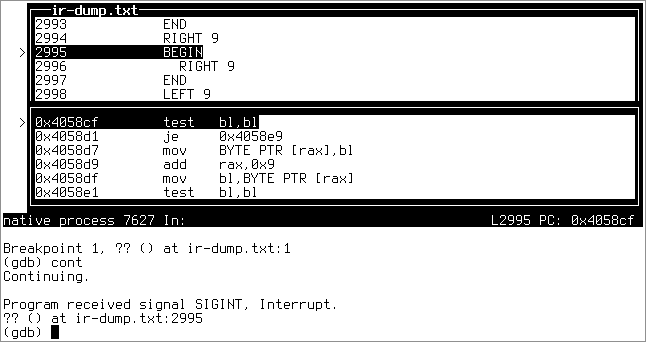 Use https://git.janouch.name/p/bfc to report any bugs, request features, or submit pull requests. git send-email is tolerated. If you want to discuss the project, feel free to join me at ircs://irc.janouch.name, channel #dev.

Bitcoin donations are accepted at: 12r5uEWEgcHC46xd64tt3hHt9EUvYYDHe9

This software is released under the terms of the 0BSD license, the text of which is included within the package along with the list of authors.